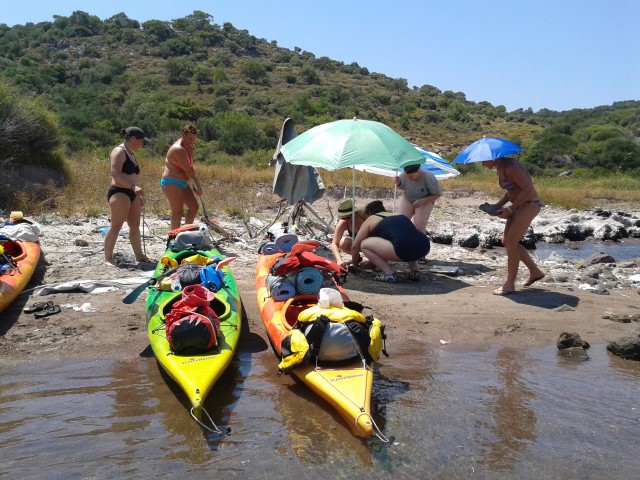 We crossed together the silky mill-pond sea
And under the palm fronds we made fire, drank our wine and took our first communal tea
There was a windy night
Wild waves and flapping tents and when our tents fell down a little bit of early morning fright

There was an early morning launch and a hurried island escape
And the bliss of tea and coffee and ample sweet honey and chocolate cake
Bravely we took to the sea, but soon were shipwrecked and shivering on Molyvos beach
‘No problem!’ the girls said, ‘There is sweet Congas cocktail bar to reach!’

At sunset the wide Aegean sea stretched far and wide and Molyvos Castle glowed golden to the East
We happened on a little Greek Taverna – there was a venerable feast
There was much ouzo toasting to celebrate our life and to honour others’ who have moved on
And later we strolled home along the moonlit shore, arm-in-arm, making trust circles and singing a merry song

And there was our cowshed where we felt so safe together
We slept soundly side by side in the dust and dung, life could barely be better
There was an early launch on the silky sea and gentle oars in the minty water still and low
And soon there were sweet mona lisa smiles in the steamy sun-strobed dome of the spa at Eftalou

There were soft wide, white-linen beds and a shower
And some quietness that settled on us all in the sunset hour
An early night and rest
On our last day an early start and to be at our best

We paddled hard and determined – drawing close together
Silver diamonds on the sea – the moment lives on forever
Fear, cold, joy, exhilaration – we felt it all on that bucking heaving gunmetal sea
That wild and urgent force of our life and that sweet and sudden adrenaline glee

We arrived drenched and wildly alive and drank our cherry brandy hot
And soon as the clouds blew away sunbathed with some beers in the perfect beach cabana spot
And then there was the final bathing in the Thermis – we emerged light, bright, pure and free
Washed so thoroughly clean after five days of being bound so close together by the stormy Aegean Sea

We make adventure easy. Get in touch to secure your spot. You will be so glad you did.